The Center for Great Neighborhoods (CGN) has unveiled the all-new artist installation of the Triptych Art Fence at the Hellmann Creative Center.

The Triptych Art Fence is a sculptural wall fence outside the Hellmann Creative Center in Covington that features two triptych murals, each reflecting an aspect of Covington. CGN commissions new murals from local artists every 12 months so that the fence acts as an evergreen piece of public art.

Native plantings surrounding the facility were provided by local horticulturist and artist Gertrude Lorenz, and the fence was fabricated by local artist David Rice. The panels are installed facing one side, and after six months the murals are rotated so that the panels face the other side.

This year’s artists, Gina Erardi and Rick Gray, both have studios inside the Hellmann Creative Center. 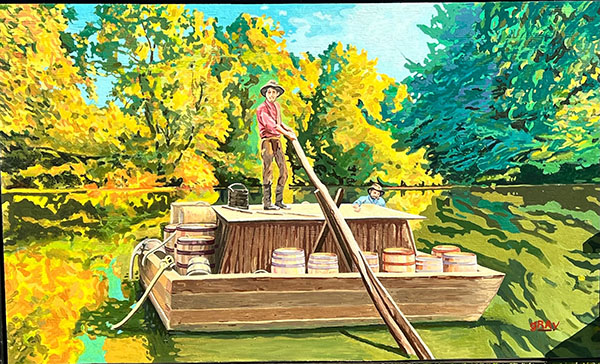 The last panels were installed on September 2.

Erardi said his mural included allusions to the work of the great American painter and Covington native Frank Duvenek, reflecting a dynamic and playful Covington.

“I often imagine this anachronistic scene where Duveneck (d. 1919) witnesses modern Covington: he walks up and down Goebel Park and sets up his easel,” she says. “His still life, composed of ripe fruit and crockery, inevitably attracts Goebel goats to his workstation. Whether it’s my hands or hers depicted in the painting’s third scene, we can all agree to raise a glass to Covington and the artists who have been lucky enough to pass through its streets.

Gray’s Murals provide insight into an earlier period of settlement along the Ohio River Valley region and the “Buffalo Trace”, depicting the native tribes and early European settlers who roamed the region, as well as the early pioneers who traveled the river in flatboats and Native American Horses.

“What’s more to Kentucky than horses?” Gray said. “This particular horse, ‘Brownie with the Chalk Eye’ is described as a freshly captured pony, which had been briefly captured by the Shawnee or another regional tribe.”

The Triptych Art Fence installation is an outdoor exhibit and can be viewed at the center, located at 321 W. Martin Luther King Blvd. in Covington.

The Center of the Grands Quartiers