In Ithaca, NY, the UW-Whitewater gymnastics team finished fifth at the March 26 national meet. The team has not placed lower than fifth in national competition since its first National Collegiate Gymnastics Association championship appearance in 2007. The performance included two individual national championships from All-American Emily North, in the all-around, and Sarah Knetzke, in Beam.

Both North and Knetzke have career high scores in their championship efforts. After no national competition was held for the past two years due to the pandemic, the Warhawks were thrilled to be back in action and placing high in the competition.

“We worked hard in the gym and out of the gym, just grinding. Then the last two years, not being able to compete, I think, really pushed us to keep pushing and keep pushing. I’m so proud of us and the progress we’ve made, to come back and do what we’ve done,” North siad said.

The national meet was a new experience for many members of the gymnastics team, as only the three seniors had ever participated in national championships, usually everyone except the rookie in the team had already gone to national championships . With two years without national competition, nerves could have been high, but the senior north was able to relax.

“It was really annoying, you know? The thought in my head of oh my God, it’s Nationals and this is my last competition, was in my head. But I just tried to focus on my team and just prayed through the game for peace,” North said.

North and Knetzke felt incredibly grateful to have won national titles after all their hard work. They are both proud of their team’s accomplishment of finishing fifth in the competition and believe the ‘purple circle’ has a strong bond that will lead to even greater success in the future.

The bond the team had was clear when asked if the other had achieved the ultimate goal of winning a national title. The two had nothing but praise for the other.

“I’m so proud of Sarah, there’s no one more deserving than her,” North said. “She worked hard and she got there. I am so happy for her.

“She is by far a staple of our team. She always came to talk to me and gave me a pep talk on the beam. Right before I left to compete, she would come up to me and calm me down,” Knetzke said. “She had a huge voice on the team, she was in every event. Basically our MVP honestly, she really was such a good leader.

For Knetzke, winning his own national title was a bit more special after not competing as a freshman last season. She also went to rehab during the season after suffering a broken tibia in December. After being shut out just fifteen minutes before her first competition of the season, she said she had to overcome the pain to perform.

“I didn’t even get to compete until our last home meeting in the regular season,” Knetzke said. “I didn’t think I was going to be able to compete all this season. So once I found out I was going to get this opportunity and the coaches set this schedule for me to come back and they told me they wanted me to be in this last regular season meeting home. I was like wow I couldn’t believe it but I did everything I could, all the rehab I could do and mentally prepare myself, train as hard as I could and it paid off .

Both described their individual national championships as the result of a team effort, an effort of family, coaches and teammates. Knetzke felt that her father had a huge effect on her, especially while she was working through rehab.

“He kept telling me to follow your dreams, to follow what you love. And I think especially after being injured, he was the one who told me that if you have that opportunity, you have to run with it and grab it, don’t let anything stop you because you don’t want to look back with regret,” Knetzke mentioned. 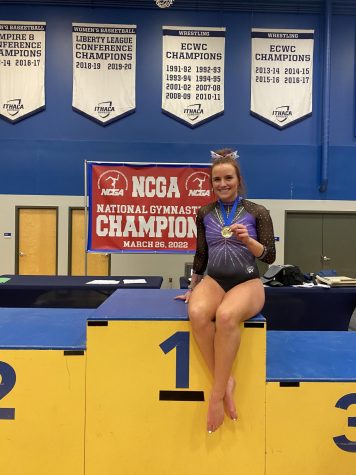 As the two look to the future, two very different paths await them. North will graduate in May before returning home to Oklahoma where she plans to attend veterinary school. As for the second year, Knetzke plans to continue her rehabilitation and regain lost strength so she can make another comeback, this time a return to competition in the floor routine.

The team’s fifth place finish was the third-best finish by a WIAC team during the competition, UW-Oshkosh placed first and UW-La Crosse finished third. In addition to the two national champions, the Warhawks took the top three spots in individual events from Kara Welsh, Faith Mylin and Kelsey Kollhoff who tied for second behind Knetzke. Lauren Globe and Rachel Lewellen also placed in the top eight, securing the Warhawks seven All-American honors.