On equity in sport; hoaxes Ã  la Smollett; paganism with guns; the Unser and the Andretti; the biggest restaurant name in history; and more

Yesou may have heard of the varsity athlete who swam for three years – in the men’s team. Now the athlete in question is swimming in the women’s team and is breaking all records. Other members of the team are complaining.

I have great sympathy for those who are different, I think. I understand transgender a bit (I think). But you know what would be amazing in my opinion? If such an athlete would say, â€œI’m transgender. I can’t help but be who I am. But I will not compete on the women’s side. Because it’s unfair. Unequal. Unsportsmanlike, even.

I think such a person would be very tall.

Jussie Smollett’s conviction on Thursday for lying to police about a racist and homophobic attack came nearly three years after his report on a horrific hate crime quickly became part of a polarized political landscape, with of people – including the President of the United States – weighing all over.

Hoaxes, we will always have them with us. I noticed them from an early age. I especially noticed hoaxes concerning race and sexuality. There is a cult of victimization in our country, and a lot of people want to join in. But do you know what the sin of the hoax is? They cause people to be skeptical of things that really do happen. They are wolf criers.

Harmful human phenomena, we are talking about.

â€¢ Even those of us who are strong on the Second Amendment have to admit that there is a gun cult in our country – it is frightening and paganistic. He’s been on Christmas cards lately – Members of Congress Christmas cards. They pose with their families, armed to the teeth. Merry Christmas! A Savior is born to us!

When I was young, a lot of men had guns. Some of these guys were veterans – who’ve had to kill people with guns before, overseas. They never got around with guns. They never posed with them on Christmas cards. They would have considered that like crazy.

â€¢ A title in the the Wall Street newspaper reads: “US-backed opposition movement in Venezuela is in danger of breaking down.” (Article here.) The chavist the dictatorship is very lucky. They have the support of Russia, Cuba, China and Iran. (What a beautiful composition.) And the opposition is starved, exiled and divided. Yes, a very lucky dictatorship, which is tragically unlucky for the Venezuelan people.

â€¢ “DC Council renames the street in front of the Saudi Embassy in honor of Jamal Khashoggi.” (Article here.) Good. Murderous bastards, calling themselves “kings” and “princes” and so on. Yes indeed.

â€¢ Lithuania is rather courageous. The other two Baltic states are also. They know what it’s like to live in the shadow of a behemoth who wants to eat them. Obviously, they are sympathetic to Taiwan. Recently, Lithuania allowed Taiwan to open an office in the Lithuanian capital, Vilnius. The Balts want to express their solidarity with the Taiwanese.

Headline: â€œLithuania Prepares for Boycott of China-Led Businessesâ€. And the opening sentence of report: â€œChina has asked multinationals to cut off their relations with Lithuania on pain of being excluded from the Chinese market. . . “

Big tyrants, the PRC. And little Lithuania is leading by example.

â€¢ Aung San Suu Kyi led a busy life (to put it mildly). She has stood up to the military rulers of her country, Burma, and paid a heavy price. (I sketch it in my history of the Nobel Peace Prize.) In a democratic opening, she was elected to high office. But it accompanied the depredations of the military, in particular the persecution of the Rohingyas. (I wrote about this in a 2018 article: â€œHorror in Burma.â€) Now Myanmar’s democracy has been overthrown by the military, and Aung San Suu Kyi has been convicted and sentenced.

â€¢ After Joe Biden’s victory in the 2020 presidential election, Benjamin Netanyahu, then Israeli Prime Minister, congratulated him. President Trump deemed this to be disloyal. “I haven’t spoken to him since,” he told an interviewer. “F *** him.”

(For an article on this topic, go here.)

As for Netanyahu, he published a declaration: â€œI highly appreciate President Trump’s great contribution to Israel and its security. I also appreciate the importance of the strong alliance between Israel and the United States and therefore it was important for me to congratulate the new president.

It goes without saying that a US president must view foreign relations in national and international terms, not in personal terms. The president shouldn’t act like a high school kid. Every Republican would point it out, if a Democratic president acted like Trump did.

But partisanship seems to rule everything now. . .

â€¢ I wish to recommend a letter from a reader – not written to me, but to Charlie Sykes, from The rampart. I consider it a powerful letter. It’s from a student at the University of Chicago. He quit the Democratic Party “because the political culture of the left has become more and more toxic”. Yet he is also an enemy of Trumpism.

Crime plagues Chicago, as it has for a long time – but if you report it, you could be labeled a racist.

I would like to quote the whole letter – every word – but you can read it for yourself, here. i consider him an american cry of heart, adapted to our age. The reds on the left won’t like it; the reds on the right won’t like it. But other people may find it interesting, even moving.

By the way, imagine being 20, 21, and having already left a political party! Reagan waited until he was fifty. (Me too.)

â€¢ On Twitter, Patrick Chovanec do An excellent point, I thought: Republicans are stepping up their rhetoric about “socialism” – even “Marxism”. Here is a tweet from Marco Rubio: “The $ 3.5 trillion Biden plan is not socialism, it is Marxism.” At the same time, says Chovanec, Republicans are turning their backs, even sneering, to any argument that dares to evoke the free market.

I had a memory of the 2016 campaign, I mean, the Republican primaries. I followed Carly Fiorina a bit on the track. (To read the resulting article, click here.) And when she talked about health care, she said, â€œWe have tried everything except the free market. We should do it.

I almost fell dead. And I completely agree with her.

â€¢ I always recommend things to read – and I know people have so little time. But let me highly recommend the obituary in the New York Times Al Unser, the racing car driver. It’s fascinating, on several levels.

By the way, if â€œrace car driverâ€ isn’t the right term, forgive me. People are very sensitive to such things. I mean, people knowledgeable in one area are susceptible.

The Unsers are a big family of drivers, as you know. The obituary states that “more than a dozen members of the Unser family worked in auto racing, including Al Unser’s older brothers Jerry and Bobby.” There is also Al Unser Jr., aka “Little Al”.

Father and son have shared the trail several times. . .

The Unser’s competitive relationship became a national priority in 1985, when they were both considered the favorites to win that year’s series of races sanctioned by the championship motor racing teams. If he won, Unser Sr. would be the oldest driver to win the season; Unser Jr. is said to be the youngest.

At the 1985 Beatrice Indy Challenge, which its promoters called “one of the most dramatic showdowns in sports history,” Unser Sr. stopped next to his son near the end of the race. They briefly looked at each other directly and waved their hands before Elder Unser took the lead and won the race. . .

â€œI have really mixed feelings,â€ he said after the race. â€œI would have liked to see Al win. Championships are hard to come by.

But, he added: â€œYet I am a runner and I have to run. I said yesterday, if he wins it, he will have to win it.

He beat his son for the title of the season by one point.

The Andrettis – Mario and them – are also a big family of runners. The Andretti and the Unser mingled. They visited each other, raced snowmobiles and jet skis. â€œWe all became one big family after a while,â€ said Mario Andretti.

â€¢ Want to do some language? A reader writes,

I know you love to write on words as much as you love to read on words. The other day, a friend was discussing an upcoming Christmas family reunion and said her four “niblings” would not be there, due to COVID.

“Nibling? ” I asked. I was then “treated” with a lecture on words such as “Latinx” and an explanation of “snacking”. I thought she was crazy until I found the following :. . .

And what follows? This, at Merriam-Webster: “nibbling is a non-sexist term used to designate the child of a brother or sister replacing â€œnieceâ€ or â€œnephewâ€.

Oh come on. As John McEnroe would say, you can’t be serious.

â€¢ A teacher reported on a little girl I know – six years old. The teacher was incredibly diplomatic: â€œHer leadership skills and strong beliefs will serve her well in the future. Kindergarten, however, is a little different.

â€¢ Kevin Williamson brought me a restaurant name he knew I would love. Should I ever. Actually the restaurant is a food truck – but quite close. The name certainly refers to mofongo, a classic Puerto Rican dish. But I don’t care: it’s still the biggest restaurant name in the history of the world.

â€¢ Fancy some pictures? It is an elegant and majestic facade in New York. Simple, classic, uncluttered – with a “holiday” touch. 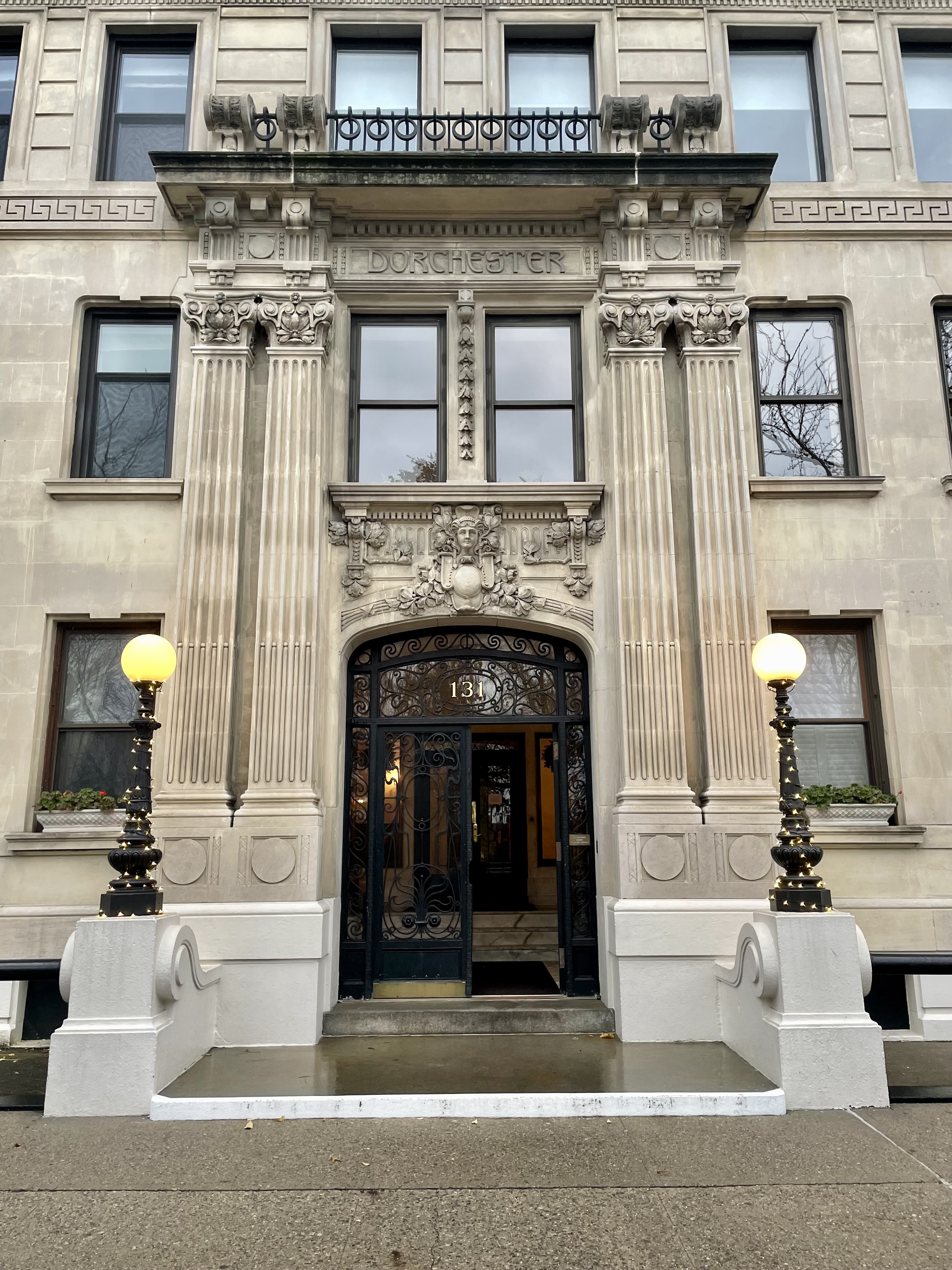 Here is a Christmas scene outside the Plaza Hotel: 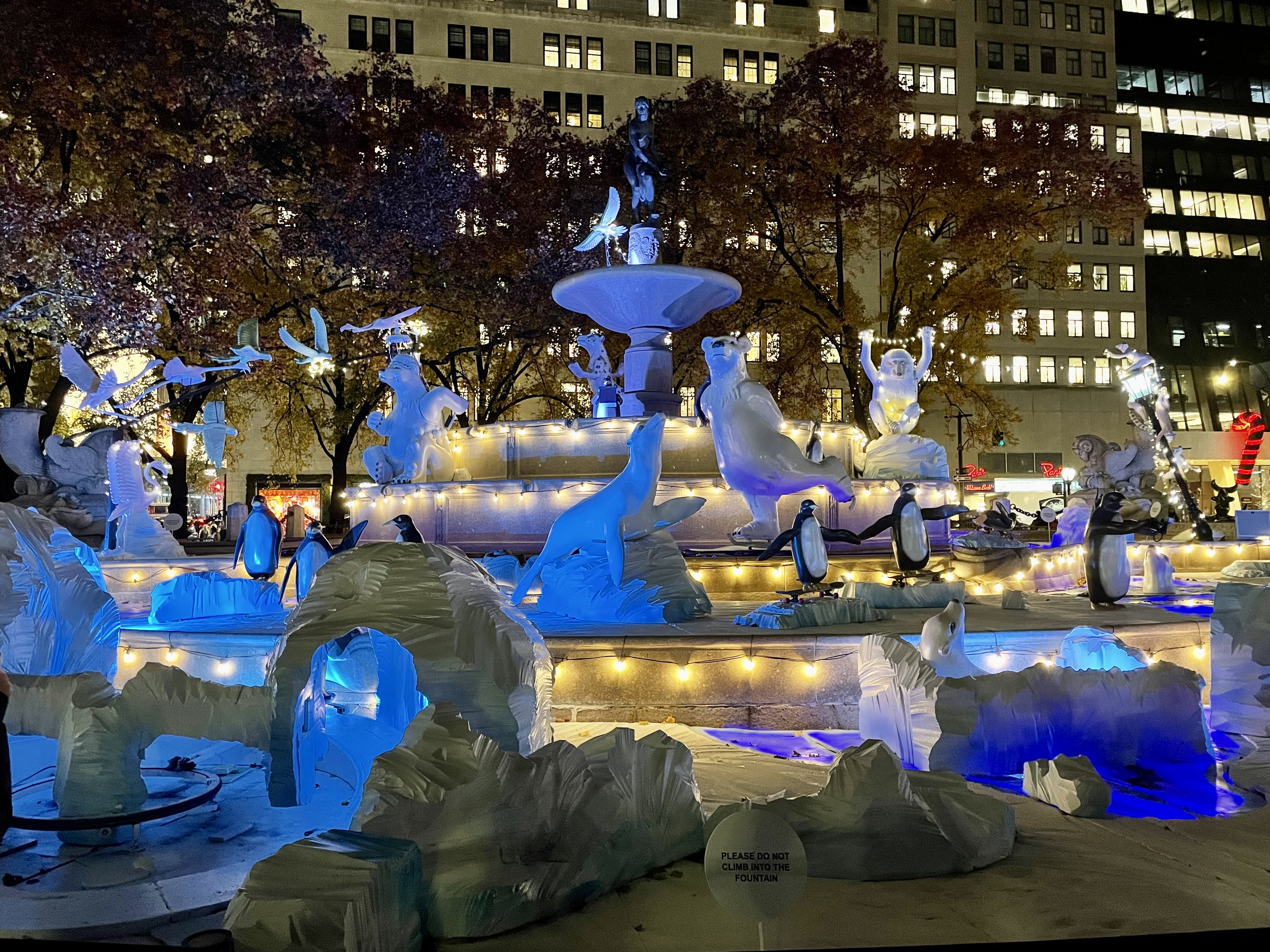 Have you ever done your shopping at Cartier? Just in case Service Merchandise doesn’t have what you want? 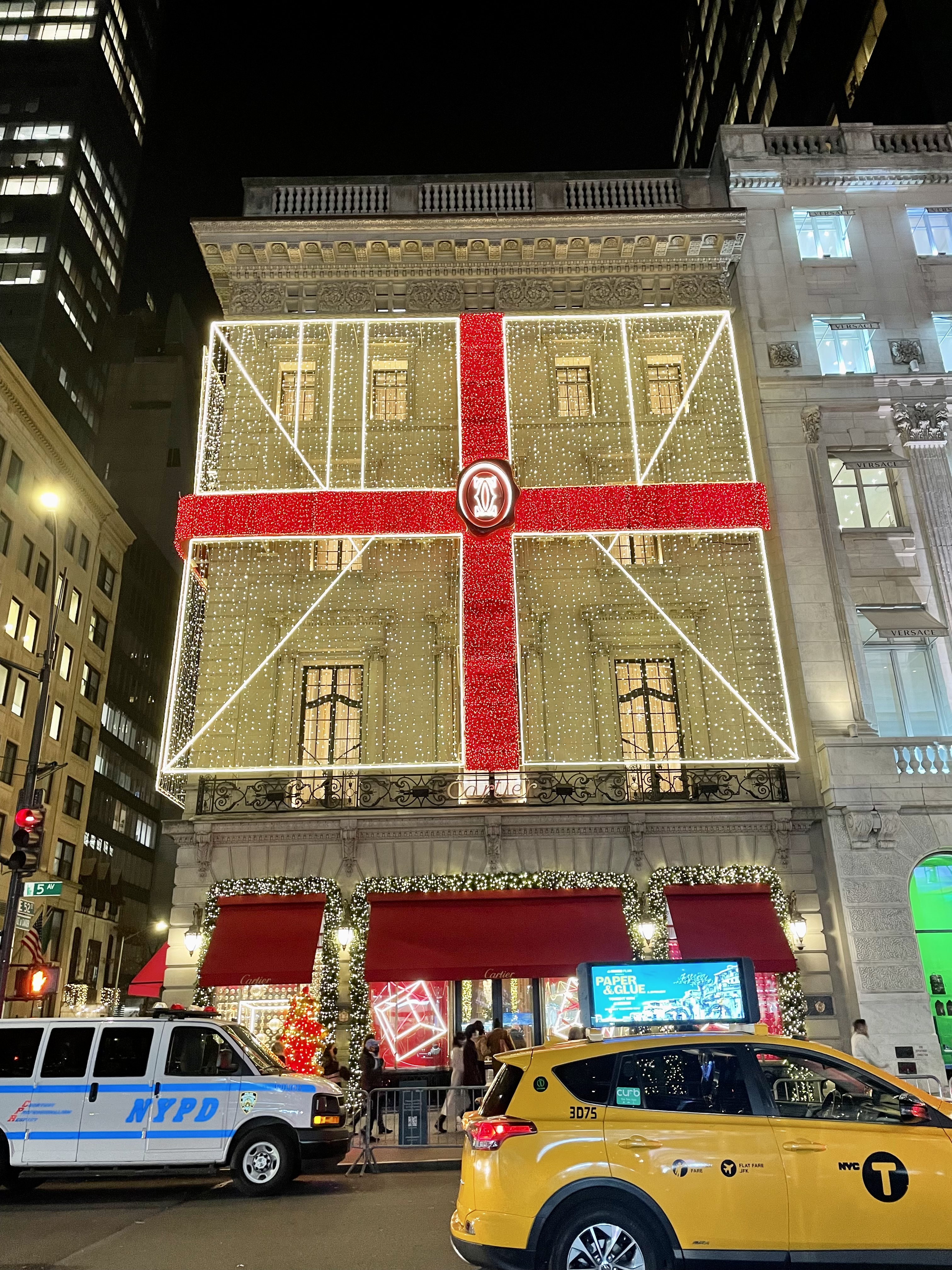 (Just checked: Service Merchandise closed in 2002, having started in 1934. I’m a stereotypical curator, who can’t keep pace. If the last ten winners for Best Actor and Best Actress come into my living room in right now, I probably wouldn’t recognize any of them.) 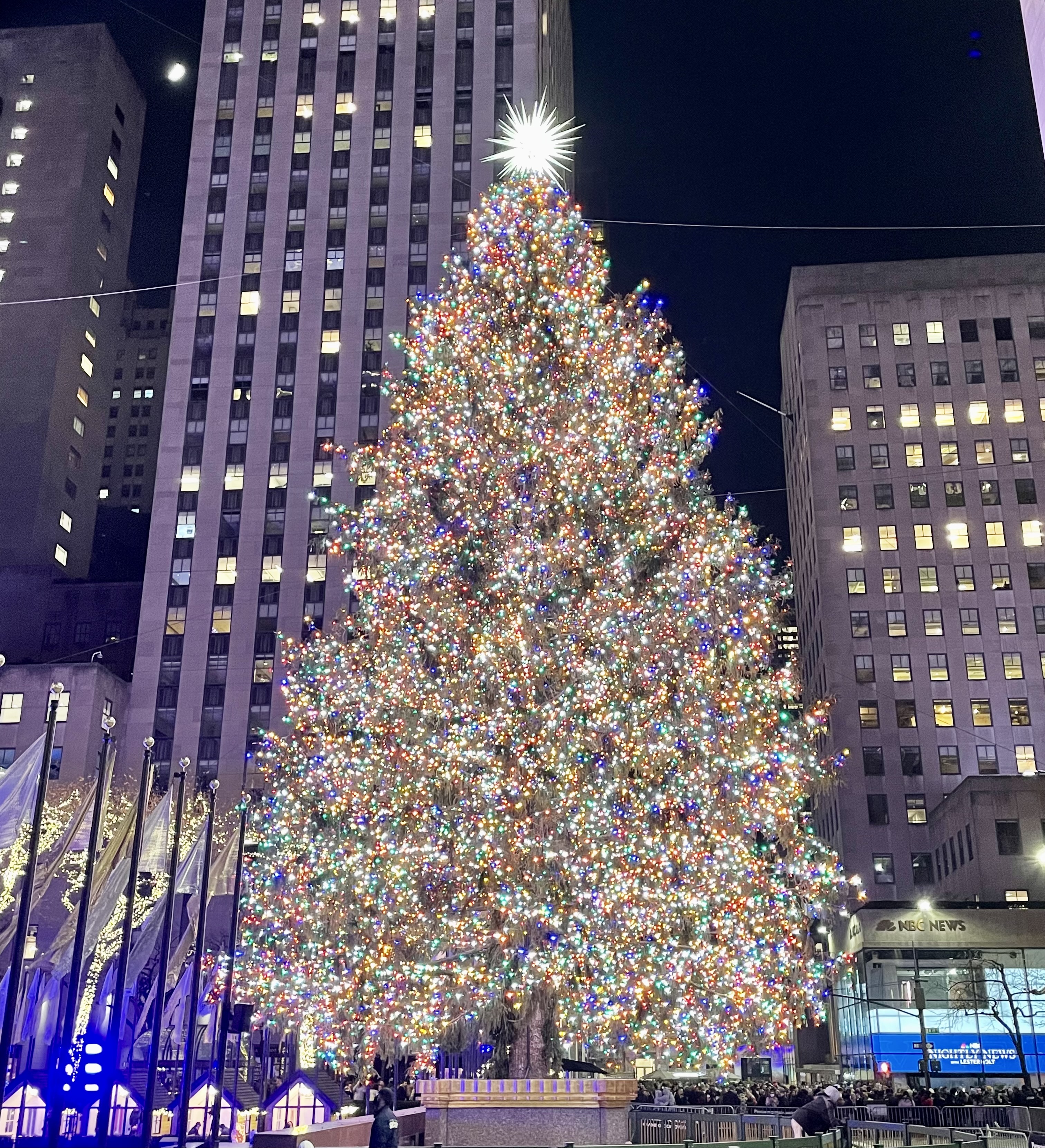 Thank you for joining me, my friends, and have a good week.

If you would like to receive Impromptus by email (links to new topics), write to [email protected]